From the establishment of the Greek state to date

Celebrating 200 years since the Greek Revolution, the Historical Archives of Alpha Bank and the Bank of Greece joined forces in a scientific meeting on 200 Years of Greek Economy: Between State and Market.

The meeting took place in Nafplio, Greece, on 2-4 December 2021, and was convened under the patronage of H.E. the President of the Hellenic Republic Ms Katerina Sakellaropoulou

The relationship between Greek economy, state and market

“Crucial Interactions in the History of the Greek Economy: Ideas, Social Correlations, Institutions and International Circumstances”

“The Political Economy of the Greek State”

(Athens University of Economics and Business and Bank of Greece)

“Seeking Trust: The Weak Banking Accumulation in Greece in the 19th century”

“The Development of the Greek Power Grid: From Electric Street Lights to Electric Cars”

“The Demographic History of Greece, a Short Review of the Demographic Developments and Population Rearrangements from the Formation of the Kingdom of Greece to Date”

“Women Between Household Organisation, State and Market: What Happened to the Demand for Equality?”

“The Ottoman Past and the Stereotype of Modern Greek Cacodaemony”

“Orthodox Ethics and the Spirit of (Greek) Capitalism”

“Two Centuries of Undermining: Social and Cultural Origins of the Regressions Between Economic Development and Underdevelopment”

“Greek Merchant Shipping in the 200 Years of the Greek State”

George Pagoulatos (Athens University of Economics and Business and ELIAMEP)

“The European Transformation of the Greek Political Economy”

“A Short Account of Greek Industrialisation: The Road Less Travelled”

(Athens University of Economics and Business)

Nikos Vettas (Athens University of Economics and Business and IOBE)

“Greek Agriculture, 19th-20th Century: From Self-Consumption to Market; from Market to State Regulation”

“International Economic Examples and Greek Economic Policy: From the Monetary Stabilisation in 1927 to the European Monetary Union”

Vasileios Rapanos, Chairman of the Board of Directors, Alpha Bank

“Capabilities of the State and Economic Reforms”

Yannis Stournaras, Governor of the Bank of Greece

(University of Athens and Alpha Bank) 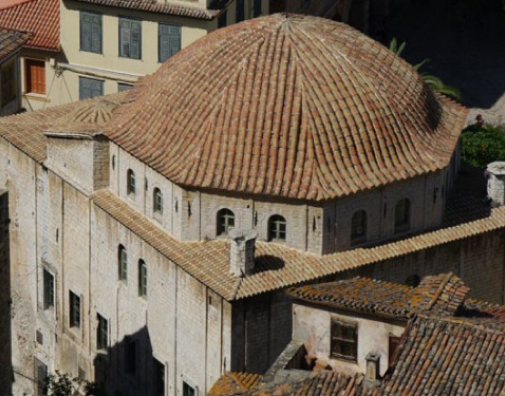 The meeting will take place in the building of the Vouleftiko, in Syntagma Square, Nafplio, the Greek nation’s first capital. It is called “Vouleftiko” because it housed the first Hellenic Parliament (Vouli), from the autumn of 1825 to the spring of 1826.

This historic landmark was built during the period of the Turkish occupation of Greece, in around 1730, and initially operated as a mosque. It was later converted into a school, prison and courthouse.This is where the trial of two of the leaders of the Greek Revolution, Theodoros Kolokotronis and Dimitrios Plapoutas, took place.

The Vouleftiko was completely restored by the Ministry of Culture and now serves as a conference hall. The ground level houses the Municipal Gallery, displaying works by contemporary Greek artists.

ΔΕΙΤΕ LIVE
200 Years of Greek Economy: Between State and Market | A scientific meeting of the Alpha Bank and Bank of Greece Historical Archives under the patronage of H.E. the President of the Hellenic Republic Ms Katerina Sakellaropoulou.