The “Alpha Bank Group Volunteer Day” has been established since 2009, as a yearly initiative that aims at further raising awareness of the Group Employees, in Greece and abroad, on social and environmental issues.

This year, in total 350 volunteers from the Alpha Bank Group Personnel in Greece, Cyprus, Romania and Albania, together with their families, participated in cleaning and landscaping actions of public places.

In Greece, the "Alpha Bank Group Volunteer Day" was held on Sunday, June 18, 2017, in Athens and Thessaloniki, with the participation of 32 volunteers from the Bank’s Personnel.
During this year’s “Volunteer Day” in Greece, cleaning and landscaping actions took place for the restoration of Athens Conservatoire and Nea Paralia in Thessaloniki. In Athens, a team of volunteers cleaned the surfaces that had been damaged by graffiti, at the areas surrounding Athens Conservatoire, while two other teams participated in planting and landscaping works on site. In Thessaloniki, volunteers from the Bank’s Personnel together with volunteers from Anatolia College and YMCA of Thessaloniki restored damages at the parks located at Nea Paralia, under the guidance of employees from the Municipality of the city. For this action, the volunteers used cleaning and protection material that Alpha Bank has donated to the Municipality of Thessaloniki.

In Cyprus, 100 volunteers, members of Alpha Bank Cyprus Personnel participated in cleaning and conservation actions at the Park of the Cyprus Land Development Corporation in Aglantzia, Nicosia, at the Limassol Central Park, at Spyros Beach in Larnaca, at the Park of Paralimni in Ammochostos and at Dasoudi Park in Paphos.

In Romania, 150 volunteers from Alpha Bank Romania Personnel participated in the landscaping of Bucharest Botanical Garden which is more than 150 years old. The volunteers started planting the “roses garden”, a place inside the Garden with more than 150,000 visitors yearly and has increased needs for conservation and landscaping, while they painted the fences of the surrounding area.

In Albania, 68 volunteers from Alpha Bank Albania undertook the cleaning of the historical, from the 15th century, Bashtova castle, removing the vegetation which blocked access to the visitors.

The active participation of all is a valuable contribution to Alpha Bank's efforts for a better world, as it reflects the Group’s corporate responsibility and promotes teamwork and cooperation. 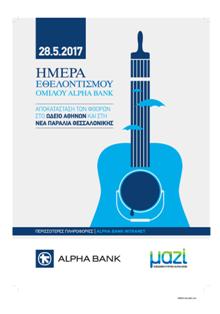