The “Alpha Bank Group Volunteer Day” has been established since 2009 as a Group-wide initiative that aims at further sensitising its people on social and environmental issues.

This year, about 1,000 volunteers from the Bank’s Personnel, together with members of their families, participated in social and environmental actions in five (5) countries (Greece, Cyprus, Romania, Serbia and Albania).

In Greece, the "Alpha Bank Group Volunteer Day" was held on Sunday, May 22, 2016, in Athens and Thessaloniki, with the participation of 60 volunteers from the Bank’s Personnel. During this year’s Volunteer Day, events for children were organised at the Planetarium of the Eugenides Foundation in Athens and at the Noesis Science Centre and Technology Museum in Thessaloniki, for the benefit of children sheltered in Children's Homes and other Foundations in the two cities. The volunteers welcomed the children and, together, they followed the guided tours given and watched scientific shows and presentations, after which they bade farewell to the children offering them gifts. The children’s enthusiasm and joy were particularly touching, not only for the volunteers but also for the children’s escorts, who congratulated the Bank for this initiative.

In Cyprus, a group of volunteers hosted events in restaurants and playgrounds for children from shelters, foundations and special schools. About 50 volunteers in total took part in these activities, playing with the children, having fun together and distributing gifts on behalf of the Bank, thus confirming the objective of the Alpha Bank Group Volunteer Day.

In Romania, 128 volunteers from the Bank’s Personnel, together with members of their families, participated in tree planting and embellishment activities in the Botanical Garden of Bucharest. The volunteers planted trees and decorative plants and also placed new benches and waste bins. In addition, in the framework of Alpha Bank Romania’s cooperation with the Romanian SOS Children’s Villages, 15 children from the SOS Children’s Villages in Bucharest participated in the above activities by helping the Bank’s volunteers in their work to embellish the Botanical Garden.

In Serbia, volunteers from the Bank’s Personnel participated in the “Wall of Kindness” initiative. This initiative, already well-established in Serbia, seeks to encourage people to offer clothes and food supplies to those in need. The particular event was held simultaneously in six (6) cities across Serbia with the participation of 250 volunteers, who contributed food supplies, personal hygiene items and articles of clothing, bringing them to eight (8) designated locations. In total, more than 60 cartons of supplies were collected.

In Albania, on the occasion of the “Alpha Bank Group Volunteer Day”, volunteers from Alpha Bank Albania SHA undertook to clean up the Kepi I Rodonit cape area, in order to restore the natural beauty of the site. More specifically, 110 volunteers, united by the slogan “Together, we make the environment cleaner”, collected about 300 bags of litter. In addition, on Sunday, June 5, 2016, about 100 volunteers from Alpha Bank Albania SHA undertook to plant 3,100 pine trees at the Lura National Park. The park is home to seven (7) natural lakes and tree-planting drives to landscape the area are often carried out.

The active participation of all is a valuable contribution to Alpha Bank's efforts for a better world, as it reflects the Group’s corporate responsibility and promotes teamwork and cooperation. 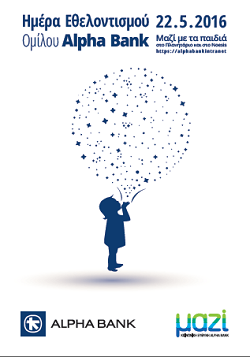