Six countries, more than 1,000 volunteers together, transform the vision into action!

The “Alpha Bank Group Volunteer Day” has been established since 2009 as a Group-wide initiative that aims to further sensitise its people on social and environmental issues.
This year, more than 1,000 volunteers from the Bank’s Personnel with members of their families carried out actions of a social or environmental nature in six (6) countries (Greece, Cyprus, Romania, Bulgaria, Serbia and Albania).

In Greece, the "Alpha Bank Group Volunteer Day" was held on Sunday, May 17, 2015, in Athens and Thessaloniki, with the participation of 60 volunteers from the Bank’s Personnel. During this day, children's theatre plays were performed for the benefit of children sheltered in Children’s Homes and other Foundations in the two cities. The volunteers welcomed the children, talked with them and played together, distributed gifts and watched the plays together. The children’s characteristic enthusiasm and joyful reactions were particularly moving, not only for the volunteers and those taking part in the plays, but also for the people that accompanied the children to the event, who congratulated the Bank for this initiative.

In Cyprus, volunteer groups participated in cleaning, planting and maintenance activities in Public Parks located in all administrative districts. In addition, during the week from May 11 to May 17, 2015, groups of volunteers hosted events in restaurants and playgrounds for children from shelters and foundations of the various district administrations, offering them food and play. The volunteers also presented the children with gifts, on behalf of the Bank. A total of approximately 130 volunteers participated in these activities, confirming the objective of the Volunteer Day and demonstrating their sensitivity to issues relating to society and the environment.

In Bulgaria, 300 volunteers participated in environmental activities organised in various cities in the country and dedicated to the 20th anniversary of Alpha Bank Bulgaria’s operation. More specifically, volunteers in Sofia planted 300 trees and cleaned the Momina Skala Hut area on Mt Vitosha. The other groups of volunteers cleaned parks and seaside areas in Plovdiv, in Varna and Burgas, and in Ruse and Pleven. In Blagoevrad, the Bank’s volunteers planted flowers in the courtyard of a Home for the Elderly.

In Serbia, a total of 450 volunteers from the Bank’s Personnel collected more than 3,000 books, which were donated to support school libraries in four cities. This action was also supported by the Ministry of Education, Science and Technological Development of Serbia, as well as by the four Municipalities where the corresponding events took place.

In Albania, on the occasion of the "Alpha Bank Group Volunteer Day", Alpha Bank Albania SHA organised in the artificial lake of Tirana the “Run 4 Autism” sport event – a Marathon race dedicated to the children with autism. More specifically, about 60 volunteers from the Bank's Personnel took part in the race, in support of children with autism and of their full integration in society.

In F.Y.R.O.M., the “Alpha Bank Group Volunteer Day” is scheduled to be held on June 6, 2015, and will continue the Bank’s cooperation with the F.Y.R.O.M. Red Cross for the programme “Clothing for Everyone", under which members of the Bank’s Personnel donate clothes, shoes, toys and bedding clothes.
The active participation of all constitutes a valuable contribution to Alpha Bank’s efforts for a better world, as it reflects the social responsibility policy implemented by the Group while also promoting teamwork and cooperation.

Together, we make the world a better place! 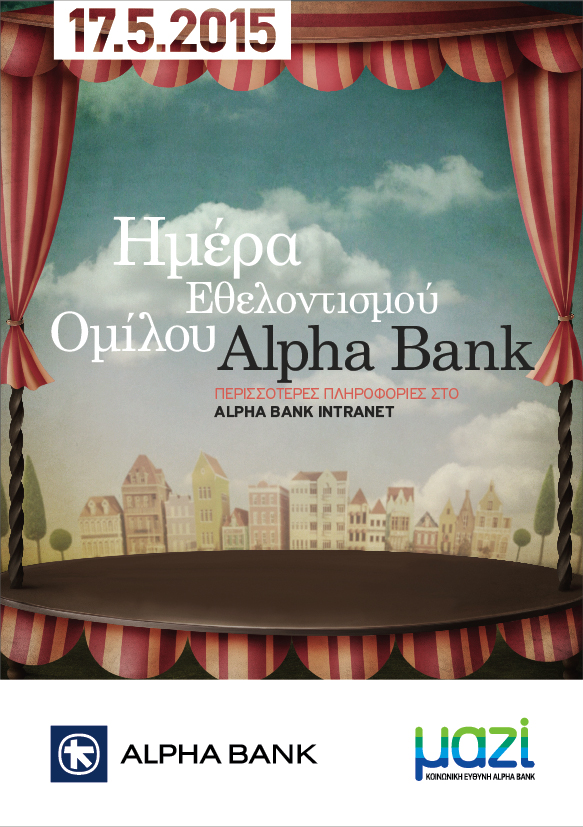