8 Countries, 961 volunteers together, transform the vision into action!

In view of further sensitising the people of the Alpha Bank Group family on social and environmental issues and as part of the Corporate Social Responsibility of the Bank, since 2009, the last Sunday of May in each year has been established as the ''ALPHA BANK GROUP VOLUNTEER DAY''. This year, on May 27, 2012, volunteer groups comprising members of the Personnel and their families carried out actions of a social or environmental nature in Greece, Cyprus, Romania, Bulgaria, Serbia, Ukraine, Albania and F.Y.R.O.M., thus promoting teamwork and cooperation.

In Greece, 147 volunteers participated in social contribution events which took place in Piraeus, Thessaloniki, Larissa, Patra and Chania. The aim of the events in all the cities was to collect food supplies and offer them to families in need, through soup kitchens and “social grocery stores”. A total of 380 boxes, weighing approximately 3.5 tons, were collected and delivered to the parish church of Aghios Nikolaos in Piraeus and to the Social Grocery Stores of Thessaloniki, Larissa and Chania, as well as to the Municipal Care Office of the Social Organisation of the Municipality of Patra.

In Cyprus, 30 volunteers offered food supplies and other indispensable articles to destitute families of women suffering from breast cancer and to multi-child families with severe financial and other problems. In particular, the Volunteers of the Bank and members of their families distributed food and other supplies collected, in order to support the “EUROPA DONNA Homes” Cyprus, which operate as shelters for women suffering from breast cancer, in the districts of Nicosia, Limassol and Larnaca.

In Romania, 130 volunteers from the Bank Personnel and members of their families along with children from the Social Centre Sinaia participated in the embellishment of the surrounding area of the “Village Museum” in Bucharest. In addition, the children wrote essays and painted the “house of their dreams”. Their creations became part of the Museum exhibits. Finally, with the aid of prominent artists, the children made pottery which will be used to decorate the educational centre of the Museum.

In Serbia, 200 volunteers of Alpha Bank Srbija, who firmly believe in such actions, spent an evening with children deprived of parental care. In particular, they played with them while, at the same time, offering clothes, toys and books.

In Ukraine,160 volunteers participated and collected medicines, stationary and other staple commodities which they offered to the St. Martin Orphanage.

In Albania, in the context of the “Tirana Municipality Project” of the Tirana Municipality, which is sponsored for six months by the Bank, 13 volunteers, collected food supplies, which were then offered to 150 families accommodated in three social centres at Tirana.

In F.Y.R.O.M., given the adverse financial circumstances, 81 volunteers of Alpha Bank a.d. Skopje offered food supplies to families in need, in particular areas where Alpha Bank a.d. Skopje has a presence. It is worth mentioning that a speech on the importance of volunteerism and humanitarian actions took place before the voluntary event. Then, the volunteers of Alpha Bank a.d. Skopje undertook the distribution of food supplies (in a form corresponding to the standards set by the Red Cross) in the aforementioned areas, separated in two different teams, in order to acquaint themselves and converse with the families. It is noted that the food supplies appropriated for senior persons or persons with special needs were delivered directly to their homes.

The active participation of all constitutes a valuable contribution to Alpha Bank’s effort for a better world; it reflects the social responsibility policy implemented by the Group while also promoting teamwork and cooperation.

Together, we make the world a better place!

* It is noted that the Alpha Bank Group Volunteer Day, took place in Bulgaria, on Saturday, May 12, 2012, in the context of a nationwide campaign organised by the b-TV station for the cleaning of the country. 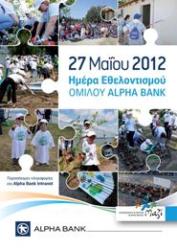